The invention of the first hard disk drive in the 1950s represented a leap in technology that lead to a whole new world of possibility for computers. It’s creator, IBM, recognized that it was no small feat and created a little film showing some behind-the-scenes of the years of development. It’s a retro look at tech R&D and marketing and a perfect throwback for this blog, whose namesake Platter Chatter wouldn’t exist without the innovation.

The motion picture created by IBM The Search at San Jose details some of the inspiration for the first hard disk and the process and result of developing the new technology. It is a sort of promotional film that a behemoth business like IBM, often called ‘Big Blue’ for decades, would create to spread the word and help sales. The video is a gem because it also celebrates some of the R&D innovation that was taking place that the time in both the company’s San Jose facility and the general area that would start to become known as Silicon Valley. The hard disk solved a need for “storage capacity, speed, and versatility” for businesses everywhere and ultimately people everywhere. Being able to store large amounts of information and still have more or less immediate access to it was nothing short of a revolution because it opened up possibilities for brand new computing applications, many tools and useful things we have long taken for granted today. The video even mentions the challenge of trying to figure out what exactly could be done with the newfound power of immediate data access as nobody had ever really thought about it! The IBM 350 system, often called a RAMAC for “Random Access Method of Accounting and Control” weighed about 1700 lbs and held about 3.75MB. That may seem ridiculous by today’s standards, but core principles of data storage began here and would be the foundation for many decades of digital development even as things were tweaked, improved, evolved into different media and shrunk in physical size to this day. Seeing this part of history makes one think about about how far we’ve come and the capacities we talk about now and it’s pretty impressive. This was only 65 years ago. Our appetite for storage and access to data has never been bigger.

A Book of Hard Drive History 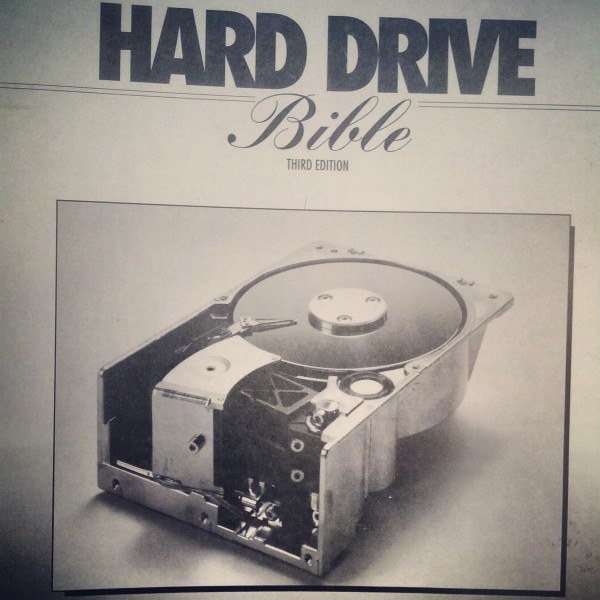 Digging up this old archive footage reminded us of another artifact from around the data recovery lab. In the early days of data recovery our hard-working engineers would have some handy manuals, programming reference books and something called the Hard Drive Bible around. This book was a compilation of information of the inner workings of hard drives: from theory on how read/write heads worked, the mechanics, software, and design of drives, and an index of thousands of specifications of the available of makes and models on the market. With many more manufacturer models and variations on the market than there are today, sharing similar core digital storage fundamentals but each with their own unique settings and parameters, having a reference at hand of the number of sectors, cylinders, speeds and interface specs was handy. In a fast moving and ever expanding tech world, the book was handy for the odd reference lookup but beyond basic specs never remained too up-to-date (hence many different editions released) leaving engineers to solve data loss problems and challenges with their own ingenuity and bespoke solutions. We would see a large variety of drives in for recovery including a variety of physical sizes like the big chunky hard disk pictured on this bible cover (believe this one is circa 1991). In modern days of course we now have online manufacturer databases, PDFs, and over 25 years of our own CBL Data Recovery research and notes to reference also, but it’s fun to look back at one of the pieces that helped us help people get lost data recovered back in the day!